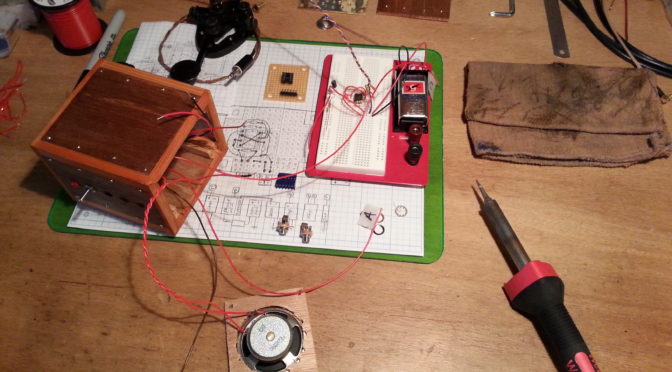 The shack/radio bench is rapidly evolving. I have been working on several radio projects, most of which have been relatively small. The most recent project is a CW (Morse Code) practice oscillator. It allows me to practice sending code while I learn.

I had built a transistor based oscillator which worked okay but the tone wasn’t that stable, or loud enough to be that useful. I had a drawn up a simple transistor amplifier that I planned on adding to the circuit board, but the design is still less that optimal from a stability standpoint
After building the transistor version I decided to try an IC (integrated circuit) based oscillator. The tone quality, stability, and volume are much better than the transistor type. I built the oscillator on a breadboard to test the circuit out and make sure everything was in working order.

After checking everything out I started laying it out on paper the way I would actually wire it all together on a proto-board.

Everything worked great so I was ready to get to the next phase of the project, building the housing for the whole thing
The plan for the case was to build a wooden box with as much of a vintage (read steampunkish) look to it so it was time to move operations from the shack/radio bench down to the workshop.

First up was to design a basic box. I chose Douglas fir for the frame pieces and mahogany plywood for the panels.

Since I was going for the steampunk look, brass, lots of brass. Everything was stuff I had around the shop so there was no waiting. More importantly, I have lots of the stuff so I can experiment a little.

The box was all hand cut and assembled. Everything is held together with glue though I did use brass pin nails for accent. The brass speaker grill doubles as a retainer for the analog acoustic speaker. I didn’t want to use the cheap plastic one in the project. The sound just isn’t the same as the paper speaker.

The other end panel was going to just be wood and nails, but I decided to go with an accent that would double as a way to open the panel. This panel needs to be removable because the battery is on this end. I went with a key hole on a whim, it just looked right. It was a bugger to hand file the whole plate but I think it’s worth it.
The box took two days to plan, cut out all of the materials and to assemble. The brass work was done the second day as well. It took a third day to apply the several coats of linseed oil that I used for the finish.

Once the box was all done and the finish was dried it was time, on the fourth day now, to plan out exactly how I was going to install the guts.

I know this was not a very thoroughly planned project. I planned out the electronics pretty well, but the case, well that was very much an on-the-fly thing.

Any way, back to the timeline, with all of the case work done it was time to relocate back to the shack.
Back in the shack I worked out the bugs in case design, well, I developed the work-arounds for the issues that arose from the case design. What can I say, one of the reasons I am doing this project is for a learning experience and I have learned a few things about project design, and project housing design in particular.

There are several things I would do differently if I were to do this project again. One would be to reconsider trying to stick mostly with hand tools. I could have saved myself a ton of time had I built the frame using my router.
I could have routed a single channel strip on the router and just cut the pieces and mitered it all together.

Another change would be to use tiny screws to hold the panels in. I would have had much better access while installing the guts.

As they say, hindsight is 20/20. Lessons well learned and worth learning.

Below is a short video of the oscillator in operation.