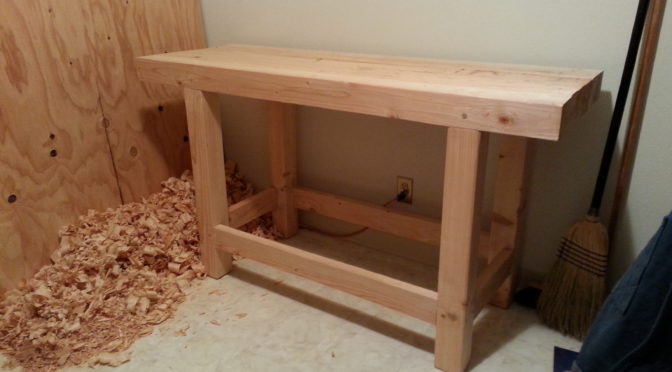 While I was in A&P school almost everything I posted was, of course, aviation related. Since I graduated a lot of my time has been spent working with wood. One of the biggest projects, literally, was a new woodworking bench using traditional joinery and oak draw-bore pegs to tightly secure it all together. (later I added a crochet at the left front that was attached with 2 lag bolts which constitute all of the metal on the bench)

But wood isn’t everything. Back in October I took my first Amature Radio license test and earned my Technician class license, last month I took the General class exam and earned my General class license. I’m used to doing computer hardware work and in the past I did a little electronics work so I was familiar with some of the stuff involved in radio, but not a lot.

Back in the 80s I was into CB radio. Later in life when I was working in the towing industry I did a lot of electrical work on our tow trucks which included the radios, and of course, installing my own car stereos since I could drive. These other activities made me a little familiar with Ham radio, but only in a very cursory way. What pushed me to finally do what I had wanted to do for decades was learning more about aircraft radios in A&P school.

Now my “electronics bench” is shifting from computers to radio. I have some basic electrical diagnostic tools and a full compliment of basic hand tools, but I am lacking in some of the basic radio diagnostics and bench-tools. As with woodworking and other trades, what better place to cut your teeth than making some of your own tools.

This week on my radio projects list I had one bench tool, a dummy load. For those who may not know, a dummy load is what you would connect a radio transmitter to, instead of an antenna, to conduct a variety of bench tests, usually power output related. Not having a load while transmitting, an antenna or dummy attached, a radio can burn out; basically you are generating a lot of “power” but not giving it anywhere to go. While testing you don’t want to connect an antenna because you would be transmitting all of your tests on-air wasting air-time and occupying a frequency someone else could be using for communication.

So thats why a dummy load, now for the what. A dummy load is used to dissipate RF energy, that would otherwise be radiating from an antenna as radio waves. The load can be dissipated through a resistive material as heat instead of radio signals.

An easy way to accomplish this is to use a resistor with relatively low resistance and that can also handle high power loads. Another criteria is that it shouldn’t radiate, or leak, spurious signals.

That last part becomes tricky because you can’t use resistors that are made from coiled wire, normally the kind used in high power applications because the coils inside the resistors will generate inductive fields. Another more practical way is to use a bunch of lower wattage resistors in parallel so the wattage is accumulated and the resistance kept low.

A trick that can be used to help in the dissipation of heat from the resistors is to submerge the resistor package in a fluid medium that will help dissipate the heat generated by the resistors making them more efficient. The trick with this is to use a medium that has a high flash point so you don’t accidentally start a fire. This is called a “wet dummy load.” It is recommended that transformer oil is used; this is what utility companies use for the same purpose in their large power transformers. Unfortunately this stuff is very expensive. The last time I checked it was $2,300 for a 55 gal drum, about $42 a gallon if you could find it in anything less than 5 gallons. Fortunately there is an alternate, mineral oil, which is pretty close.

So what’s in store next you may ask… A field strength meter is on the list for next week. With any luck I will be able to get out and do some shopping for that project in the next day or two.