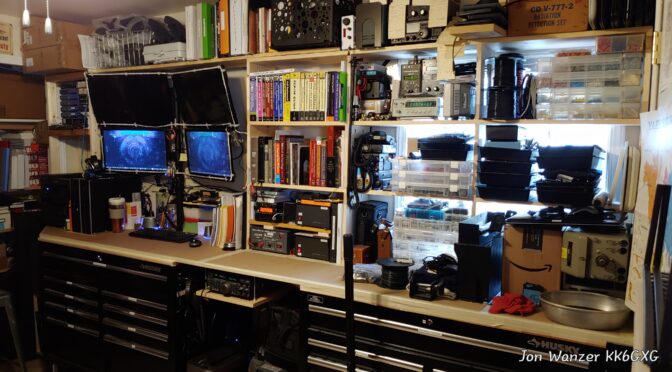 I am the midst a a major shift in what I call the shoffice (shop-office) space. My work space is an odd 10 x 15 space with 4 doors, steps, and a closet to work around. We have been here over three years and the shoffice had been in the same configuration for most of that time. It has never worked well as it was laid out.

After months of planning and figuring out ways to overcome obstacles, literally, I came up with a plan and began implementing the changes. Things are still a mess right now but things are coming together.

Of course all of this moving stuff around meant disassembling the radio station, changing out antenna feedlines and redoing all of it. It is a big job and I took my time to plan and execute each stage of the change but complications arose and need to be dealt with as they came up so it was slow going. The changes are is a vast improvement but there is still more to be done.

Much of the project work has been along the same lines, Packet, APRS, Raspberry Pi, and some custom cable work. The big change has been a shift in focus to IP networking for EmComm. I have been testing out ARDEN, BBHN and other options for an EmComm mesh network. I have also been doing a lot of work with VoIP telephony with IP dialing and building an easily deployed PBX system which can also be tied into the RF network once things are in place.

The majority of my operating has been EmComm and NTS nets. No DX or contesting.

I have been building my collection of components, parts, sub-boards, and other bits. The junk drawer continues to grow. I have a small collection of RF circuit boards from various satellite and aviation radios, and various consumer electronics devices ready to give up parts to future projects. I also have a few donors that haven’t been parted out yet.

I have been building a collection of WiFi routers and 2.4 GHz antennas for the IP networking projects I mentioned above. A collection of VoIP phones, as well as a collection of laptops and Raspberry Pi computers. I have been looking at building AllStar nodes which use Asterisk, a PBX software package, as it’s foundation which will ultimately allow us to link radios over the mesh network and/or over the internet and eventually link radio nodes, repeaters, the PBX, and independent VoIP phones. This is where much of my time has been going.

Another shack upgrade is battery backup for all active equipment. The batteries are on constant grid charge/maintenance, well, at least they were. My charge controller didn’t like the load even though it was supposedly rated for it. But that’s another story for another day. I do have a solar backup system waiting in the wings. It is not ready for full time installation, but I hope to be able to deploy it soon. It is available for grid down conditions if needed. I hope to rebuild the system, expand the battery bank, and test the solar more frequently over the next year.

For those closely scrutinizing the photo of the shoffice (shop/office) I am a theology student preparing for my M.Div. hence the book choices on the shelf above the radios and power supplies, and if you were wondering about the white ribbon like stuff outlining the monitors, this is a 12V LED tape for front lighting, I do a lot of conference calling. Not visible is the photo gray background I have draped behind me for conference calls.