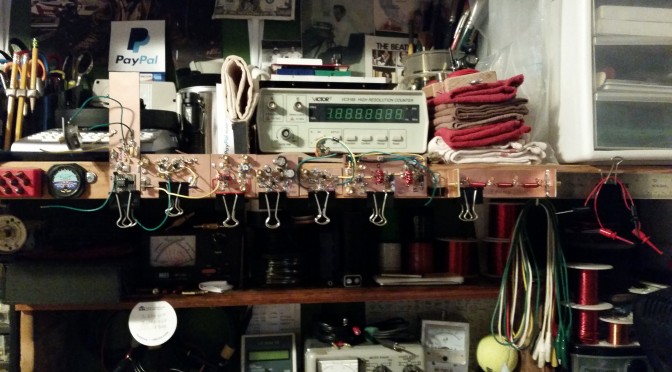 The Beach 40 saga continues. My original VXO design, well… it stunk. I’m not sure why, but the best selectivity I could get out of it was only a couple of kilohertz, very annoying.

I have been working on a VFO design to get full band selectivity but in the meantime I came into some ceramic oscillators for 7.2 and 3.68 MHz. The best part is that I replaced the entire Super VXO section with a 140ρF variable capacitor and two ceramic resonators.

By placing the 140ρF var cap in series with the two paralleled resonators and feeding the output directly into the local oscillator buffer… Ta da! A working  VXO.

This time, instead of a few kilohertz the VXO pulls a full 148 kHz, from 7.173 MHz down to 7.025 MHz. It is certainly not the full band but it is a useable range. Over a five minute period, I noticed a slow 50 Hz drift that eventually settled out to a point where it continued to float ±10 Hz.

This is not a final solution, but it will work well enough to get this QRP DSB transceiver on the air for testing.

Of course now that I have a working VXO attached to the local oscillator buffer, it’s time to hook it up to the product detector/balanced modulator… success! With the VXO, buffer, product detector chain attached to an antenna it was time for a little listen.

The audio amp still has some issues as far as power drain off when power is disconnected, but it does fine as an amp. I plugged everything together and plugged the audio out into an external amp so I could tune around without headphones.

Not much on the band, but my frequency generator with a small antenna plugged into it put out enough RF for the receiver chain of the Beach 40 with the temporary VXO to pick up its 400 Hz signal and cross reference the VXO frequency displayed on the oscilloscope with that of the frequency counter connected to the frequency generator. So one could say I have a working receiver, mostly anyway.

Anyway, that’s all for now.

Until next time,
~Jon KK6GXG

UPDATE: As promised, the conformed schematic for the VXO/Buffer section…