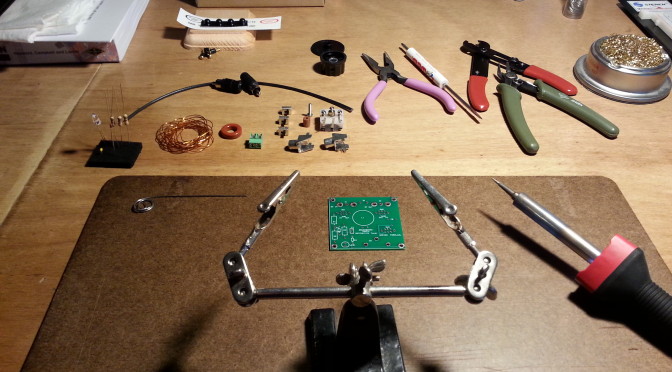 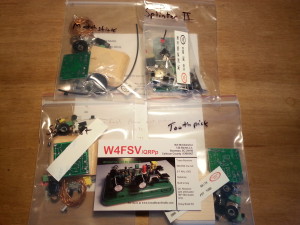 On Wednesday I received some awesome mail, the kits I ordered from BreadboardRadio.com arrived! As I am inclined to do, I opened things up and began organizing and inventorying the contents there in. Counter to the habits of a younger Jon, I printed all of the distructions, what I tend call them, and read them all, cover-to-cover. Even before setting up the first project!

There was some broadcast, not sure if it was AM bleed or SW though I am leaning towards SW, phone (voice), and some digital transmissions. I believe I heard both RTTY (Teletype) and PSK31 (ASCII keyboard-to-keyboard). No CW though. I was really hoping for some Morse Code. Lots of band noise. The solar storm this week is making for some interesting sounds.

Progress shots were taken and will be uploaded to the usual places, here, G+, and Flickr, but I wanted to get them all wrapped up nice and purdy first. Because they are kits and will be done over the weekend most likely, I figured it was worth the wait. I am going to post about each kit separately though.

When I said a kit was completed, I deviated from the distructions in one respect. They called for finishing the wood bases before the electronics so the mounting of said electronics goes directly onto a clean, freshly finished mounting. Well, I didn’t do that.

I wanted to finish all of the bases at the same time… and, okay, I wanted to get a radio on the air ASAP. So, yes I will finish the bases, but it will be all at once. I I am not sure with what finish I will be using so for now the kits get mounted on the raw base.

Before the kits arrived I built a simple ½  λ dipole to have something to test the radios with, and it does work, but I don’t like the feed point or the wire spools. I didn’t take any pictures because, well I’m not particularly proud of it. That may sound vane, and it is, but some hack jobs just shouldn’t have pictorial evidence.

To resolve the antenna issues and to address the bases for the the kits I think a little fabricating shop time is in order. This morning I am designing the feed point / spools and after day-job stuff I will look at finishing materials for the kits.