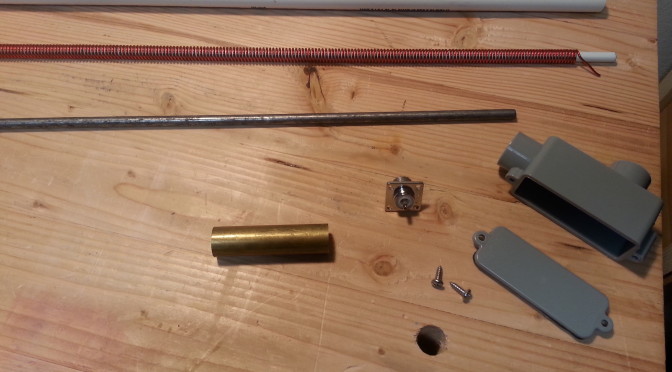 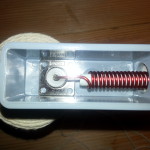 Ya know that little voice, sounds like Han Solo in the back of your head “I got a bad feeling…” Yah, that one. Listen to it.

If you look at the image of the antenna base you may notice no screws holding the OS-239 in the bottom of the conduit angle. Now I didn’t leave it all up to gravity. I wound cotton twine around the threads a bunch to keep the connector centered in the hole and was hoping that because the epoxy was pretty thick it would hold down the connector. 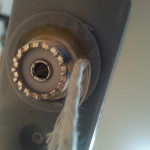 Not exactly what I had hopped for. The string did act as a great fiber reinforcement to the epoxy though. Took me the better part of an hour to dig it all out and clear the threads this morning. I know things had gone wrong last night when I did the pour. Thats when I took this picture. 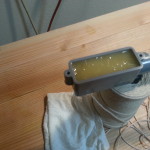 I figured trying to get the epoxy out of the conduit, off all of the components and try again would consume more time than just cleaning the mostly set up epoxy in the morning. Not to mention use up twice as much of a valuable resource. I was right on that one.

I had hoped to use a polyester resin but the can I had was older than I thought so I ended up using some West Systems T-88 structural epoxy, which was also a bit on the stale side so it was very thick. I had hoped that the thickness would be my saving grace on the SO-239. I had also hoped that a lot of the epoxy would filter down the PVC pipe with the antenna but not much of that happened either. 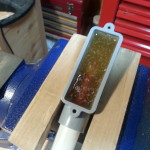 All in all things didn’t work out so bad. After some scaping, thread chasing, cutting and sanding I managed to come out with a servicable antenna base and connector that is permanently sealed. 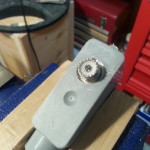 I double checked the connector with some feed cabling and all is well with that too. It won’t win any beauty contests and I’m okay with that. As long as it functions well and gives me a good match, that’s all that counts. I won’t be able to test it out until I get the last bits of the antenna finished.

If you look at the image at the top of the post you will see the steel whip is the same diameter as the fiberglass rod. I found some eighth inch bar stock in my materials along with a smaller brass rod so I shifted the plan slightly. I thought the whip should be of a diameter closer to the copper magnet wire of the antenna so the change made sense. 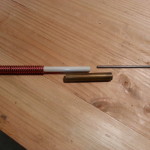 With the last few pieces cut all I need to do is drill, tap, and thread the antenna together then attach the wire to the spike and I can start finding resonance.

I should have the tap and die in the next few days so I should have a working, if not finished, antenna by the end of next week. This project seems to be taking a really long time to complete, and in a way it is. But I decided not to rush things along . I also have been doing a lot of day job stuff along the way so time has been divided.