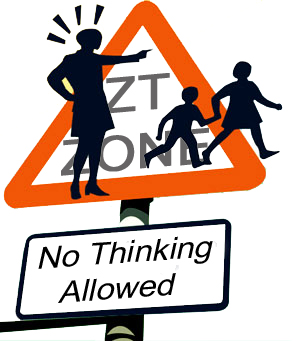 ver the last week or so it seems as though there have been a large number of Zero Tolerance cases in schools that have resulted in ridiculous actions and suspensions for elementary and middle school students. While I know this is not really anything new, they happen all the time, it just seemed to stand out today.

Just a couple of recent examples are a seven-year old boy was suspended for creative nibbling of his breakfast pastry (link to Youtube news article), a nine-year old boy was suspended for having an expended shell casing fall out of his pocket as he exited a restroom (link to online magazine article), and a ten-year old was suspended for a laser gun gesture with his fingers (link to blog article). Going back a few years when the rush of Zero Tolerance policies began to take over the school systems there were frequent news stories of kids taking aspirin or Tylenol (in some cases by doctors instructions) in school and being kicked out for drug policy violations.

Now, unless I have gone completely crazy, which is possible with all of the B.S. going on, none of these kids presented even the remotest of dangers to themselves or anyone else. In my opinion, the schools are using this broad and currently accepted excuse to jump to ridiculous conclusions and push their personal political agendas on students all while reducing their need to actually think about what they are doing.

Not only is this action producing the whiniest, most self-entitled, and frightened-of-their-own-shadow, all at the same time, generation in history, it is also making it difficult for parents to prevent these behaviors in the home. Granted, many of today’s parents have abdicated their responsibilities of child rearing to the state, but that doesn’t mean the state should be doing what it is doing. Oh, and if you are one of the latter, I don’t give a flying fig about your opinion, you are part of the problem. Stop trying to mandate everyone else’s lives and work on your own for a change.

You can’t teach children to be respectful, responsible and thinking adults when the adults around them refuse to think or take responsibility for their actions. There is no valid justification for Zero Tolerance. It doesn’t work. If pushed, saying or doing almost anything can be made to look like a violation of Zero Tolerance policies; harassment, bullying, drugs, hate speech, they all are things kids need to be cognizant of and how they affect themselves and others, how to recognize the negative effects of these behaviors and how to remove those negatives in society is all part of becoming a responsible adult.

Weapons in the school environment is particularly difficult. Anything can be considered a weapon with even a minimal effort in training or experimentation. Most of the objects in a classroom can be used as a weapon. In high school the possibilities for improvised munitions abound. This thought that a narrow view of traditional weapons with Zero Tolerance is completely insane. The most important issue is intent, “weapon” is a word describing the use or intended use of an object. A pencil is a pencil, until it is used to harm someone, then it is a weapon.

Sure there are things that shouldn’t be brought to school without a specific purpose and prior arrangement, guns are most definitely on that list. Explosives, live ammunition, sure, that makes sense on the list. An obviously expended shell casing? I hear it now, “Obviously. How would I know?” As in the law, ignorance is no excuse. If you can’t tell the difference between an expended casing and a live round, you shouldn’t be the one making decisions. It really is that simple.

Zero Tolerance is a P.C. push whose track record has been abysmal. It has been abused by administrators and teachers to push agendas and by students to exact revenge on other students, teachers, and administrators. Zero Tolerance doesn’t bring anything new to the table. All of the rules were already in place it only changes the thought process in adjudication. Actually it removes the thought process entirely. Zero Tolerance doesn’t contribute to the safety of the school environment it only fosters an adversarial attitude between families and the schools.

Can you guess where I stand on Zero Tolerance?