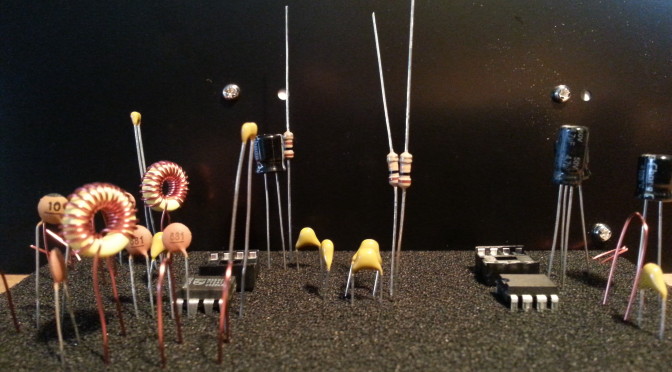 I had mentioned a little while ago that I was planning to work on a 40 meter receiver followed by a 40 meter transmitter. This is still the plan but there was a snag that I thought was worth mentioning, particularly for those new to Amateur Radio or to homebrew radios.

The 50 Ohm 5Watt dummy load I built last month, and most of the diagnostics tools I have been building recently for that mater, came from the book QRP Basics, second edition by Rev. George Dobbs G3RJV.  Another project in QRP Basics is the 40 meter (7-7.3 MHz) receiver I planned to build. The receiver in the book has some additional modifications to the RF (Radio Frequency) input section, an RF band filter and a modified tuner that replaces the VXO (Variable Crystal Oscillator) with a VFO (Variable Frequency Oscillator.) The VFO has a wider tuning capability, it can tune the entire band rather than 600-700kHz of the band centered on the crystal frequency in a VXO.

The diagram made sense, for the most part, and I could see and define the separate sections of the receiver. The challenge was my minimal knowledge of circuit diagnostics.

I got the AF (Audio Frequency) amplifier working fine. Likewise the AF input filter. It was the RF side of the equation that was giving me trouble.

It was clear that I needed to improve my skills in diagnostics so I picked up a copy of Experimental Methods in RF Design by Wes Hayward W7ZOI, Rick Campbell KK7B, and Bob Larkin W7PUA, here after referred to as EMRFD, with hopes that it would give me the information I need to better approach the radio build projects I have planned. Just 8 pages into the first chapter and it is making me think and work!

The receiver I originally planned on, and started, was from QRP Basics. A stripped down basic variation of this receiver is the first project in EMRFD starting on page 1.7. The nice thing is that this design has fewer parts, a VFO that uses a LC (an inductor capacitor network circuit) tuner that gives you the whole band, approximately 6.9MHz to 7.5MHz, best of all the complimentary transmitter is also in the first chapter.

EMRFD makes you think more about what you are doing and requires you to actually learn about each circuit segment. The first chapter outlines a very modular approach, the building blocks of the larger picture but in reverse. Start big with simple broad strokes, then narrow it to more manageable chunks, then further and further as you go. It encourages the start simple philosophy to get it working, then refine individual areas as you go.

The book goes on to give a more in-depth look at specific RF circuits, not a list of projects though, it gives you an idea as to how various RF circuits may be improved or incorporated into a design to improve the over all performance of a project. It seeks to instill an adventurous and experimental approach to RF design. Rather than a “you must” approach it is a “hay, what if” way of looking at overcoming the challenges in RF design work.

QRP Basics is a great book, and it covers homebrew radio, but more as a kit builder and operators guide rather than a circuit designers/builders guide which is what I am really looking for right now. I don’t see myself getting an electrical engineering degree, but I do need to up my game in RF circuits and basic electronics knowledge, big time.

About the title of this entry… Yesterday I completely disassembled the receiver I started two weeks ago and restocked all the parts.  The 40 is dead. Today I poured over the schematic of the EMRFD design and began picking the parts and planning the layout. Long live the 40!

While part of the goal of EMRFD is to use whatever parts you have lying around, I was going to have to make some weird choices in parallel and series multi-value/component clusters and I am not yet up to the challenge of re-designing things like LC tuning circuits so it was also shopping list time today as well. With a bit-O-luck HSC will have the variable capacitors, resistors, and jacks I need finish this project quickly.

My neatnic brain is not ready to go with “ugly” construction so my boards, at least for now, will be done on perf-board.  I know “ugly” is a perfectly acceptable prototype process, and has benefits in VHF/UHF/SHF frequency applications, but I am working in HF so a little attention to not building in inductive ground planes should be fine. My aversion to “ugly” includes using two 100 ohm resistors in series when I don’t have a 200 ohm resistor. I’m sure I will get over this affliction at some point, I’m just not there yet. In the mean time I will spend a little more time on the layout phase.

Until tomorrow the 40 is on hold. The plan is to have it up and running before April. I have a lot of projects to do this year. 😉