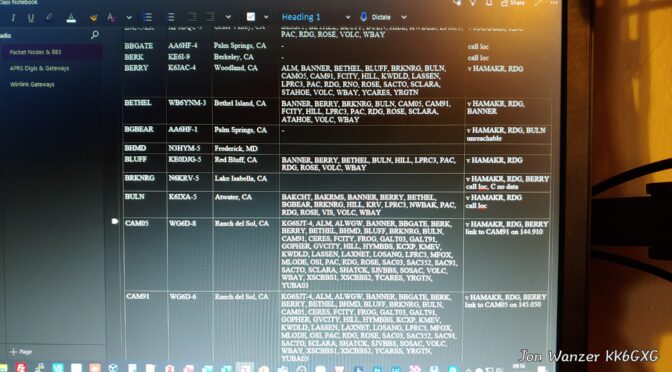 A few years ago, late 2017, I got started in Packet Radio. The local club had a couple of packet digipeaters and there was one in the EOC and at the hospital. No one was really involved in keeping them up but there was an EmComm interest in them. This was my introduction to Packet Radio.

Taking on the task of maintenance, I dove into learning the equipment we already had in place, what could be done with it, what newer technologies are available, and what potential applications may be beneficial. This lead to getting packet Winlink gateways up at the EOC and hospital and my own emergency gateway. This doesn’t even touch on APRS which is a system of formatted messaging software that uses the packet protocol as its transport method.

The packet technology stems from the early days of telephone modems for computers, 300, 1200, and 9600 bps modems. They used a protocol known as X.25, the screechy modem sound from the movie War Games is an example. Hams being the ingenious folks we are, thought if this audio can go over a phone line, it should work over FM radio as well, I’m not going to go into the protocol here, but they were right, packet radio was born.

So what “killed” packet networks? The inability for the rules to adapt to the new fangled internet, mostly anyway. As advertising and online commerce began to proliferate the internet, this presented a conflict with amateur rules for non-commercial activities.

Jumping ahead 30 years, packet is making a come back! Not that it ever really went away. People are rebuilding the old packet networks. There is some network rebuilding going on right in my own back yard so to speak.

As the financial obstacles to entry in packet radio fall to open source freeware and soundcard TNCs the biggest hurdle, aside from learning the software, is knowing the network topology. This is where this project was born. Mapping the packet network by node pathways and geographically.

Yet to come… text mapping from my station, KK6GXG-1 in Klamath Falls, OR, to the RDG node in Redding, CA via the HAMAKR digipeater.

This is an ongoing process but I wanted to make my results available moving forward.