Over the last few days I have been working on a direct conversion receiver project I found in the book Experimental Methods of RF Design last month. I had been planning and even started a very similar design back in February. I was having problems with that project so I picked up the EMRFD book to help figure out what the issue was. 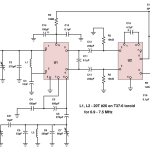 There in the first chapter was this design and I decided to scrap the other project and started working on this one.  It wasn’t like “oooo, a new shiney…” because they are very similar designs and the goal was to build a direct conversion receiver for 40 meters, not specifically that receiver.

Now that I have finished unnecessarily defending my position on hitting the reset button on the project, we can continue.

This time I decided to go with the “ugly” method of prototyping. I was not aware of the induction issues with the plastic pinboards or the other problems that can arise with high-speed or precision circuits. I had seen a few things on ugly construction and comments on its superiority over the plastic breadboards, along with other similar prototyping methods like “Manhattan.”

Since I had never done ugly before I was a bit nervous about it. I have used perfboard successfully on other projects and while perfboard does not have the same negatives as pinboards, it doesn’t have a ground plane ether. This can be problematic in RF circuits.

Any hoo. Yesterday I finished soldering the board and started mounting stuff. The project is screaming along and I have been pulling back regularly to make sure I don’t rush to finish. I have been going back an checking the new additions for physical problems, shorts, cold soldering, and the like. So far things have gone nicely.

This morning I sat down and looked at the partially mounted project box and some things crossed my mind. If I only put an antenna port on the back, instead of including a power port, I could actually have an internal battery pack. I could even add the power port and include a charging circuit for the internal battery…

I nixed this idea on this build because I intended to use a battery pack / solar charger that I already have so the power possibilities will be saved for later.

I do plan on adding a transmitter to this case. This brought my attention to the front panel. I am installing a power switch and headphone jack for the receiver, but I would need a jack for the cw key and a TX/RX switch. I could fit both of these components in the front panel integrated with the receiver parts without a problem. I could even install them now to prepare for the inevitable. I even have the parts in stock.

What I didn’t think about last night was the tuning of the transmitter. I don’t have the room for the tuning components on the front panel. I don’t know if I could modify this oscillator/mixer to work in conjunction with a transmitter thus converting the whole thing into a transceiver. I will have to get back to the book and read on.

In all honesty there are a couple of other things too. I would want a beat oscillator which would need a momentary switch and some other logistical elements to think about as well.

I spent a lot of thought on keeping this board small. I didn’t want to crowd things too much, but I wanted a small planform. I got what I wanted and I learned a few things about experimental design.

Planning ahead is not just about where the rest of this circuit is going. It includes thinking about the likely evolution of the project. Would I convert this project to a transceiver? Probably not. I would more likely build a new project ether from a different design already established, or take a lot of time and build modular circuit clusters testing them as individual units and working out the logistics of placement, interfaces, and housing configurations as the project developed.

I am actually surprised at how much I have learned from building this little DC RX, and I’m not even finished with it yet!