Sometimes it is indeed a project train, not just a project; occasionally a train wreck, but it’s early so we’ll hope for the best.

Now that I have built several receivers and a transmitter for 40 meters, I probably should have an antenna that does more than pick up all the RF noise around the shack. The antenna, and I use the word loosely, is nothing more than a dipole of 26 AWG insulated wire strung around the house. While it might work well if the wire was straightened out on a hill top, or even in a backyard, elevated 15 feet or more above ground, in its current incarnation, in a word, it sucks.

Next up on the project block, an antenna, sort of… 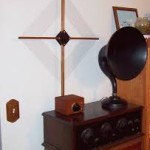 I have been looking at several small footprint antenna options like spiral coils that look like those God’s Eye yarn and popsicle stick things you may have made as a kid,  the one in the movies from the 40s when the resistance spy transmitting Nazi secrets and the SS storms in. It looks like a X and has thin wire wound around it. 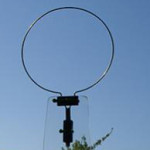 And Small Loop antennas that look more like old direction finding antennas on aircraft. And by the way, according to the formulas and general information, for 40 meters, not so small, 10′ diameter.

Now there are lots of variations and tons of experimental configurations to run with, and I do want to play with many of the possible configurations, but I need a stable, small, portable option for the immediate future. Something I could mount on the car, throw up on a pole, or stand up on the back porch, all without much effort. I also need to keep the cost down.

Enter the Helically-Wound Short Vertical. I ordered some 14 AWG lacquered copper magnet wire and a 72″ long 5/8″ diameter fiberglass rod, I need to learn to make these so I also ordered a How-To book on making composite fishing rods, and I’m in $20 so far. I have all of the hardware items including the 12″ spike for the top. What I don’t have is the variable inductor, or a tuner. 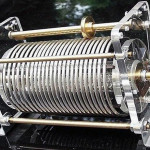 Lets start with the one I haven’t done any research on yet, the variable inductor. The mechanics are fairly simple, rotate the coil and the follower moves up and down the coil creating a tap point. As long as the coil is perfectly cylindrical, the follower makes good contact, and smoothly moves down its axis rod, no sweat.  I only need the one variable inductor according to the diagram so I really need to find out what value I need. I already have several small value iron-core variable inductors so I may not need to make this one, but if I do, it will be a homebrew. These things are a high-dollar item otherwise.

Moving on to the antenna matching unit. I have plans for one that is fairly simple and straightforward, I even have most of the parts on hand. What I don’t have is the variable capacitors. Sensing a theme here? Variable… 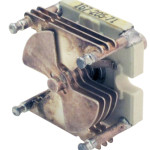 A funny coinky-dink on capacitors; while I was doing research on the Small Loop antennas I came across several websites that went into some lengthy discussions on making variable caps. Turns out, they aren’t that hard to make, I even have nearly all of the materials to make several. Not only are they fairly easy to make, but the formulas for calculating the capacitance based on the area of the plates, number of plates, and the distance between the plates is also fairly straight forward.

So lets see where we are now…
I have three receiver and one transmitter for 40 meters. There is an antenna for them, but it sucks particularly in this location. My next project is to build another transmitter, But I will need a better antenna first…

Now, after these are done I can move on to the new transmitter. As a side note, with the next transmitter project I wanted to pump up the power all the way to a couple of watts, not just miliwatting it. I also want to include SSB (Single SideBand, voice) as well as CW so I can incorporate digital modes into the shack. For all of this the antenna really needs to be better than what I am using.